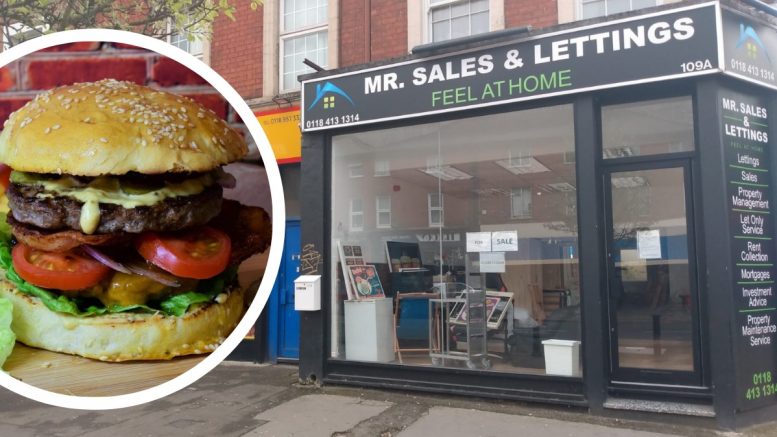 A popular Reading burger joint has won consent to set up a new takeaway near the town centre despite neighbours voicing concerns about cooking odour and rubbish dumping.

Brother and sister team Mohammed and Javeri Raja had applied to convert the Mr Sales & Letting business at 109a Oxford Road into a Fat Twins burger takeaway.

The Fat Twins at The Granby in East Reading opened in December last year, with Mr and Ms Raja wanting to open a new one at the junction of Oxford Road and Zinzan Street.

But Rupert Buckingham, who’s lived in Zinzan Street for 10 years, complained about cooking odours and the smell of animal fat wafting into his home.

Mr Buckingham said: “It creates a horrible environment to live in, it depresses me, it gets me down.”

He added that he was “embarrassed” to have friends round due to the cooking odour and littering making Zinzan Street untidy.

His argument was backed up cllr Karen Rowland (Labour, Abbey) who lives nearby.

Cllr Rowland said: “If the odour’s there, that’s what they get. They [takeaways] have not always been a positive feature of the street.”

Mr Buckingham also argued there are a high number of takeaways in the area already, questioning what different food option Fat Twins would give people.

On the same side of the street, there is Biryiani Boyzz and Pepe’s Piri Piri, and over the road, there is Pizza House, Veggie Master and Biryanish.

In reply, Javeri Raja said: “Our burgers are better than the others!

“I may get in trouble for this, but people do call us the ‘halal McDonalds’.”

She added that diners to enjoy a range of different food options to choose from.

Cllr Rowland also noted the proliferation of eateries and takeaways in the area.

She said:  “These foods can contribute to childhood obesity. They can make people obese. That’s not healthy living.”

She added that people living in the area are not wealthy, and are therefore more likely to turn to fast food.

But he and other committee members raised concerns about littering, particularly the dumping of rubbish in the car park of the building in Zinzan Street.

Cllr Josh Williams (Green, Park) commented that he had eaten at the Fat Twins in East Reading and was impressed by it, but asked whether Mr and Ms Raja exhibited a ‘hands on’ approach to management to make sure residents concern about littering are addressed.

Mohammed and Javeri Raja argued that they had a record of good management at The Granby, which involves getting staff to do litter cleaning duty to make sure the area is tidy.

Mr Raja said him and his sister had grown up in Chester Street, and therefore wanted the Oxford Road area looking presentable.

Although littering was acknowledged as an issue, committee members argued Fat Twins should not be punished for “the sins” of neighbouring takeaways.

Ultimately, every member of the committee voted for it except cllr Jane Stanford-Beale (Conservative, Peppard) who voted against it.

Fat Twins is allowed to open from 9am-11pm Sunday to Thursday, and 9am to 11.30pm on Fridays and Saturdays.

They require a licence to open past 11pm.

A total of 13 seats will be provided inside.

Although cllr Rowland is a member of the committee, she did not vote on the plans because she declared a prejudicial interest against it.

You can view designs by typing reference 201585 into the council’s planning portal here: http://planning.reading.gov.uk/fastweb_PL/welcome.asp

A Greek restaurant in Reading has proven successful enough to launch a new branch in London. Reading Chronicle | Town Centre …

A town centre kebab shop’s bid to keep serving food until 5am has been scrapped. Reading Chronicle | Town Centre …

Those in charge of one of the biggest flats developments in Reading town centre have applied to reduce the number of units it will have. Reading Chronicle | Town Centre …

RESIDENTS intending to vote at their local polling station are being urged to double-check if their usual location has changed this year as a result of a recent ward boundary review in Reading. Reading Chronicle | Town Centre …