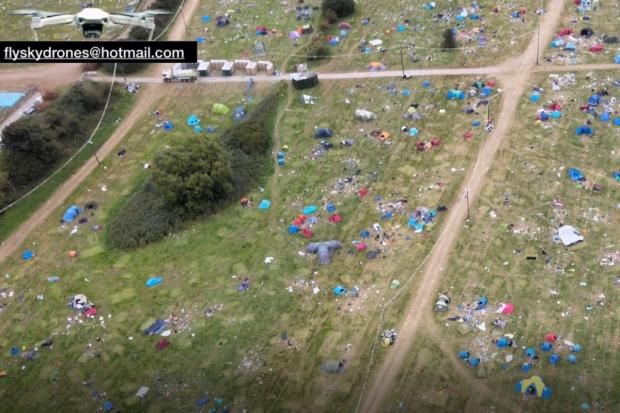 Reading Festival is just around the corner, and, as usual, thousands of revellers will flock to the town for a weekend of music and mayhem.

The event, which takes place from August 26-28, brings a big economic boost to the town, but can have a sizeable environmental impact due to the amount of waste generated.

The festival is an entirely separate event run by Festival Republic, but the council does have an important role in overseeing the impact of the event and a liaison between the organisers and the community.

Ahead of the event, Reading Borough Council has explained what role it plays to manage the impact of the festival.

A council spokesperson said: “The council’s commitment to a climate emergency and a carbon neutral Reading by 2030 means we are very clear on our policies relating to waste and recycling.

“We have high standards and expectations for the clearance of the festival site.

“As the local regulatory body, every year we carefully scrutinise how the festival has performed, including a close look at the impact on the site once the festival is over.

“We know more needs to be done and every year we have high aspirations for a better outcome.

“Festival Republic is aware of the Council’s stance, and continues to put initiatives in place to reduce the negative impacts the Festival has on Reading’s environment.

“We support Festival Republic on its expanding range of environmentally friendly initiatives in place at this year’s festival and we are thankful for the work the festival’s volunteers who will play a part in the clear up.

“The volunteers who clear up at the festival are organised directly by Festival Republic, who also work closely with local charities and community groups, to collect reasonably reusable equipment that is left behind, therefore reducing the amount of waste that goes to landfill or incineration.”

Perhaps the most notorious negative impact of the festival is the amount of waste, including tents, left behind by revellers.

Last year, footage from Fly Sky Drones showed thousands of tents left behind by attendees, with Lily Robbins, the festival’s sustainability manager, telling the BBC that many will go through an ‘incredibly lengthy’ recycling process.

The site of Reading Festival littered tents and rubbish that have been left behind by revellers at Little John’s Farm, captured in footage shot by flyskydrones@hotmail.com

The organisers have encouraged festival-goers to take home their tents and all their equipment with them.

The council spokesperson continued: “We also support by helping spread the word about a host of environmental initiatives put in place by the organisers, including encouraging festival goers to travel sustainably by car share, rail or coach travel and make use of regular shuttle buses.

“Four years ago, Reading Council pledged to do all it could to become a plastic free Council, and this is incredibly important to us.

“We know Festival Republic is working to reduce the use of single use plastics as far as possible.

“With 105,000 people attending this year’s event that is a huge challenge, but together with Festival Republic we are appealing to people to say no to single use plastics by taking their tents home with them on Sunday and Monday.

“This year, for the first time, the festival is offering its first Eco Camp, something we hope they will be able to grow in future.”

The Eco Camp is a dedicated area where campers take a pledge to avoid excess waste, recycle as much as possible, and leave the campsite exactly how they found it.

It is built on the ethos that there would be #NoReadingOnADeadPlanet.

The spokesperson continued: “People come to Reading Festival to have a good time, and we are delighted with the long relationship we have with Festival Republic and the positive focus the festival brings our town.

“What we are not eager to see, is the negative notoriety that seems to follow after the event is held.

“We know that Festival Republic understands our concerns and we are pleased to see their continuing work and initiatives in encouraging their participants to think seriously about their impact on the environment while they are here.

“Ultimately, we want our visitors to the town to embrace our climate emergency goals as we do, and to play their part in achieving those aims.

“We happily support the ways in which Festival Republic and the volunteers within our community seek to encourage that response.

“We will continue to scrutinise the situation, alongside working with the organisers, who are responsible for their own waste management policies, to ensure that everyone is minimising their impacts on the environment.”