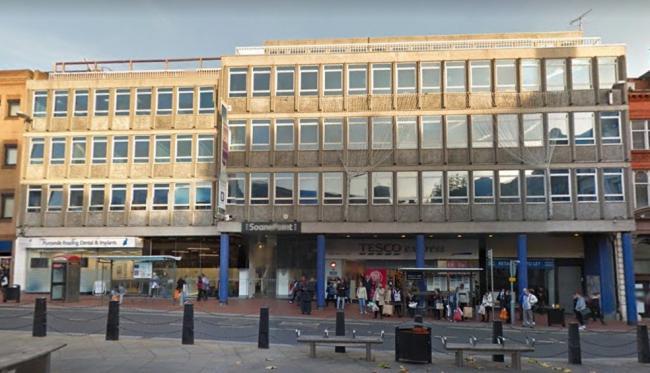 Offices in the town centre could be transformed into 144 flats, in the latest plans for the site.

Plans have been submitted by Tene Livnig to turn the offices at 6-8 Market Place into studio apartments, after previous plans were withdrawn.

In January, a plan to extend the Soane Point offices by five storeys and make it a mix of co-working spaces and private offices was withdrawn after concerns were raised by City Pub Group, which owns the neighbouring Market House and Reading’s Conservation Area Advisory Committee (CAAC).

The latest plans seek to simply convert the current offices into 144 studio flats with a change of use application, with no external alterations to the building planned.

Peter Lawson, of consultants Turley, said: “The development makes progressive use of tired office town centre office space, with its reuse adding to the vitality and viability of Reading town centre.

“Covid-19 has seen the market demand for such units grow exponentially at the expense of similar sized accommodation with shared, rather than independent, facilities, as there is less risk than that associated with ‘communal’ living.

“Accordingly the accommodation is suited to young professionals, students or those with long-term health conditions to whom shared accommodation might present a particular risk.”

The plans do not include any affordable housing apartments.

Permitted development rights allow developers to turn office buildings into homes without submitting a full planning application as long as they meet requirements such as having enough space and natural light.

It also means the requirement to provide a proportion of affordable housing cannot be enforced.

Why were the previous office-focused plans withdrawn?

The plans also included a café, gym, small kitchens and meeting rooms and would have seen the total floor space would increase from 5,378 sqm to 10,013 sqm.

City Pub Group said the proposals from Castleforge Partners would have a significant adverse impact on Market House due to the increased height, with one-to-five storey extensions planned above the building.

READ MORE: Why the plans were withdrawn

They said the plans were “akin to a tower block” and “completely inappropriate and out of character within the Conservation Area”.

While CAAC chair Evelyn Williams said the development would be detrimental to the character and appearance of the Conservation Area.