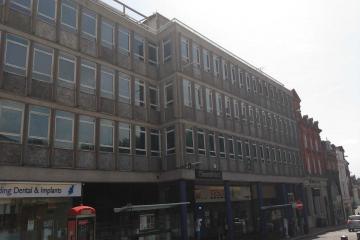 Developers who are seeking to convert offices into 144 flats in Reading have submitted a fresh plan to improve the appearance of the building.

The decision was slammed by councillor Tony Page (Labour, Abbey) who stated the conversion provided ‘rabbit hutches’ rather than suitable accommodation.

Now, Tene Living has submitted an application to change the front of the building and make substantial extensions to it.

Next door, a plan to add a floor to 11-12 Market Place, the home of Stevensons clothes shop, has been approved.

But elsewhere in Reading, the council has shot down a plan to replace a derelict shed with a one-bedroom home in the Oxford Road area.

You can view the plans by typing the reference in brackets into the council’s planning portal.

The plan appears to demonstrate a desire to replace the existing grey stone work with biege buff brick above Tesco and Georgian red brick above Puresmile.

A plan for the front elevation of Soane Point in Market Place, Reading. Credit TP Bennet

Extensions outlined in the plan would add 38 flats to Soane Point, consisting of a mix of one, two and three bedroom units.

In May this year,  Tene Living won permission to convert its upper floors into  144 studio apartments after appealing to the Government’s planning inspectorate.

Therefore, if the latest application is approved, the building could contain 182 flats.

Here, applicants International Mobility Ltd won approval to add a new floor to 11-12 Market Place, a four storey brick building which as the Stevensons clothes shop on the ground floor.

The new floor will be made out of grey zinc on the outside, and add two one-bedroom apartments to the building.

Each apartment comes with a toilet, shower, living space and kitchen facilities.

The floorplans for the two one-bedroom additional flats at 11-2 Market Place in Reading. Credit: Danks Badnell

Planning officer Jonathan Markwell concluded the plan was policy compliant, with each being sufficiently sized.

An earlier version of the plan contained two two-bedrooms, but was revised down to two one-beds in August.

Sykes Capital’s plan to replace a shed to the rear of 2 Gloucester Road in West Reading with a home has been refused.

In August, Sykes Capital submitted a plan to build a new one bed home complete with a kitchen, living room and a bathroom.

However, planning officer Connie Davis judged that any new occupant would have limited access to sunlight and almost no outdoor space.

She also argued that the new home would be visually dominant and negatively impact the amenity of 4 Gloucester Road.