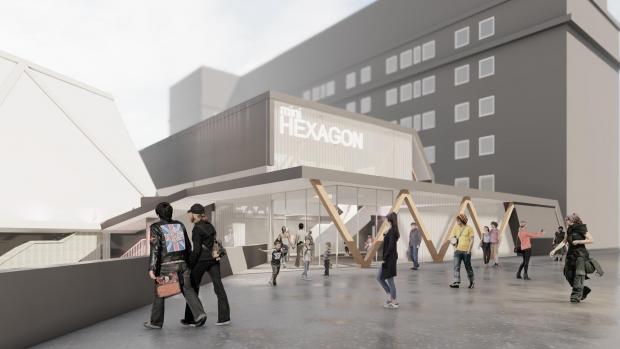 Fears have been raised that newcomers living in an exciting new area of Reading town centre could have their eyes and lungs ‘destroyed’ by the IDR.

Councillors recently debated plans for redeveloping the Minster Quarter, the area of the town centre behind Broad Street Mall,  comprising The Hexagon forecourt and public space.

The council is seeking developers to transform it into a new public and residential destination, with a total of 618 apartments and a 90 bed hotel.

But councillor David McElroy (Green, Redlands) raised fears that future residents and guests would be badly impacted by the IDR.

Cllr McElroy said: “In principle, something needs to be done with this space.

“It’s such a big open space, our imagination really is the limit, something being exercised by those making use of the Lavender Garden currently.

“But it seems like we’re mostly getting, what’s at the heart of it, is a shed load of flats and a hotel block, the occupants of which will likely have their lungs and eyeballs destroyed by the IDR.

“It is a huge opportunity but it also seems like a wasted opportunity to complement the cultural possibilities by creating a peaceful new greener space in the centre of town, but green space doesn’t even get a mention in the entire report, let alone in the Key Development Principles.

“So I guess in the pursuit of more cold drafty concrete I just find the council’s lack of aspiration for the sort of ‘city’ Reading could be to be a bit depressing.”

Reading as a whole has pollution of nitrogen oxides and dioxides and particulate matters (called PM10 and PM2.5) which exceed World Health Organisation (WHO) guidelines.

Concerns have been raised that the pollutants cause asthma and other life shortening illnesses.

However, data from the Central Office of Public Interest shows 97 per cent of the UK exceeded at least one of the WHO targets.

READ MORE: Air pollution in Reading among worst in the UK

Meanwhile, cllr Rob White (Green, Park) the opposition leader, has called for more of the proposed apartments to be affordable.

“Because the council owns the site it has the opportunity to deliver more affordable housing here.

“The current lacklustre proposal is a missed opportunity to do more to tackle the lack of affordable housing in Reading.

But cllr Brock stressed that 30 per cent of affordable housing is appropriate, policy compliant and viable for potential developers to deliver.

READ MORE: Hexagon could get £12 million in major revamp

The exchanges took place at a policy committee meeting where councillors agreed to the key principles of the Minster Quarter transformation and seek a developer to make the project a reality.

Aspects of the development include:

The project was approved by 13 votes, with cllrs White and McElroy voting against it.

The campaign to save Reading prison from redevelopment and turn it into an arts hub has received a second wind as activists are pushing for thousands more to sign a petition. Reading Chronicle | Town Centre …

A housing developer in Reading is moving ahead with its plans to build 974 homes across two developments in the town. Reading Chronicle | Town Centre …

Ahead of Green Park Station opening up for passengers later this year, the Local Democracy Reporting Service has catalogued the remarkable development of train stations in Reading Chronicle | Town Centre …

A proposal to transform part of The Oracle in Reading into apartments, offices and more has been met with a mixture of bewilderment and sarcasm by the public. Reading Chronicle | Town Centre …

Part of The Oracle could be transformed into a new retail destination and a place for hundreds of people to live as fresh plans for the centre have been revealed. Reading Chronicle | Town Centre …