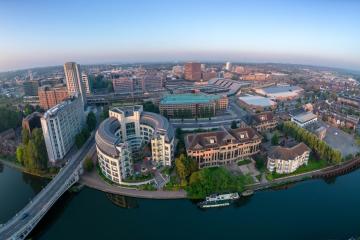 A decision to limit the amount of ‘poor quality’ flats that are created in Reading has been made.

Currently permitted development rights (PDRs) allow developments such as office conversions into flats to be fast tracked through the planning process.

Typically, plans for new homes have to comply with council planning policies and involve developers providing affordable housing and making monetary contributions to the council.

However, developments covered by PDR do not have to comply, and only need to reach fixed legal requirements to go ahead.

The direction the council has made means developers can no longer demolish commercial buildings for residential, and the conversion of shops and offices into apartments.

Planners and councillors have argued that PDRs can lead to the creation of homes that are of ‘poor quality’ and lack suitable amenity space.

READ MORE: Reading move to block ‘undemocratic’ planning developments up for a vote

They may also lead an imbalance of house types being provided, as four in five flats made through PDR have only one bedroom, according to council figures.

The creation of the Article 4 direction was put forward by Micky Leng, the lead councillor for planning, who did not give examples of poor quality development out of respect for occupants.

Cllr Leng said : “A family’s home is also their castle, so it would not be fair of me to reference or name examples of poor permitted development sites.

“This move is not the council being anti-development, and we are well aware of the need for affordable homes.

“This is about fairness and ensuring all developments go through the correct democratic planning process.”

Appearing virtually, cllr David McElroy argued that the ‘damage’ of PDRs has  already been done.

Cllr McElroy (Green, Redlands) said: “These article 4 directions are good for stopping the architectural crimes inflicted on the people of our town as well as its historic heart and character, however, often the horse has already bolted.”

PDRs also cover the conversion of houses into Homes of Multiple Occupation (HMOs), with cllr McElroy pointing out that an estimated 60-70 per cent of houses in Donnington Road are HMOs, above the 25 per cent allowed in any area.

He then called for any revisions to the Reading Local Plan seek to ‘undo the harm already inflicted’ by poor development.

The decision to make the Article 4 direction was approved unanimously by the council’s policy committee yesterday (Monday, October 31).

Currently, it covers 53 specific areas of the Borough, including the town centre, and areas of Whitley and West Reading.

The direction will come into force in November 15.

However, Michael Gove Conservative MP for Surrey Heath and the Secretary of State for  for Levelling Up, Housing and Communities has the power to change the direction and areas covered.

Mark Worringham, the council’s planning policy manager, said the Article 4 direction is likely to be revised Mr Gove at a later date.

Mr Gove also has the power to cancel the direction if desired.