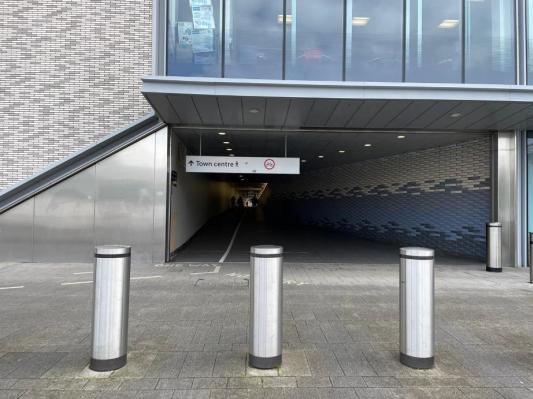 Cyclists could soon be given permission to cycle through the subway that runs through Reading station.

The subway links the north and south entrances of the train station together, giving people a route between Vastern Road and Station Road.

Although some cyclists go through the subway on their bikes already, technically they are meant to dismount and proceed on foot, as use of the subway is for pedestrians only.

Now, Reading councillors have decided to begin a consultation on letting people cycle through the subway.

The subway is pedestrian only because the council judged that the low ceiling was a potential safety risk to cyclists, and therefore it imposed a traffic regulation order banning cycling.

However, now the council is open to cyclists being able to use it, particularly as the subway provides a useful route for those living north of the station, where hundreds of apartments are set to be built.

Councillor Tony Page (Labour, Abbey) said: “It will be a nonsense to proceed with Station Hill, with the northern developments and still pretend that it is realistic or desirable to ban cycling through this important link.”

A decision to run a consultation on allowing cycling in the subway was made unanimously at the council’s traffic management sub-committee on Wednesday, September 14.

Developments cllr Page was making reference to include Station Hill, which once complete will have approximately 1,300 apartments, the SSE site, where 209 apartments are set to be built following an appeal to the planning inspectorate, and the proposed station retail park development, which, if built, would contain 600 homes.

Cllr Page took a swipe at Network Rail for building what he called a “substandard subway”, arguing that its ceiling should have been made solid material and that it has been the subject of “constant vandalism.”

Network Rail built the station, but since completion in 2013, the subway and its ceiling have been the responsibility of the council’s highways team.

Cllr James Moore (Liberal Democrats, Tilehurst) suggested that the cyclists could be segregated from pedestrians in the subway, therefore making it safe for both users.

But other councillors expressed scepticism that it could be segregated.

Cllr Adele Barnet-Ward (Labour, Thames) said: “I would be very surprised if it was possible to physically segregate through that subway, I think it’s too narrow, but what we certainly can do is look into imposing speed limits and ‘share with care’ reminders.”

Cllr Paul Gittings (Labour, Coley) said it was “absurd” and “ludicrous” that cyclists have to dismount, and that someone “would have to be a small giraffe” to be at risk of knocking their head on the subway ceiling.

However, he did concede ceiling vandalism made cycling in the subway more dangerous.

Now councillors have agreed to the consultation, it will be devised and available for people to respond to in the near future.

Network Rail has been given an opportunity to reply to cllr Page’s comments.