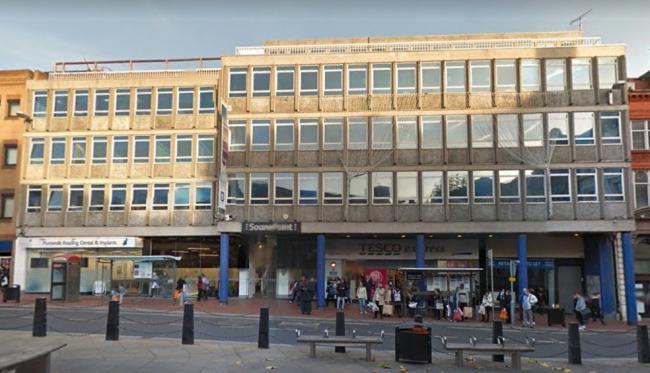 Plans have been submitted once again to transform offices in Market Place after the previous proposal was rejected and another was withdrawn.

Tene Living has applied to Reading Borough Council (RBC) to convert the offices at 6-8 Market Place into 100 flats.

The three-to-four storey office building will be converted into 76 studio flats and 24 one-bed apartments if the plans are approved.

In January, a plan to extend the ‘Soane Point’ offices by five storeys and make it a mix of co-working spaces and private offices was withdrawn after concerns were raised by City Pub Group, which owns the neighbouring Market House and Reading’s Conservation Area Advisory Committee.

Then in May, a proposal to convert the offices into 144 studio flats was rejected by the council.

The developer has reduced the number of flats for this application to meet new national requirements for all new homes to meet space standards of 37m2.

It says the latest plan comprehensively address concerns about the previous application.

But Tene Living will be appealing the decision to reject its 144-flat plan and described the council’s refusal as “unreasonable”.

The previous application was submitted before the new rules came in, which means the developer could end up going ahead with plans for 144 studio flats if the planning inspector overturns the council’s decision.

Why was the previous plan rejected and how have the issues been addressed?

As the first reason for refusal, officers said residents would either have to suffer from noise or overheating as residents would need to open their windows to get adequate ventilation.

Tene Living says it will implement a ventilation system which means residents will not have to open their windows.

The second concern was contamination, with officers saying the application failed to demonstrate that future occupiers of the flats would not be adversely impacted upon by contamination risks on the site.

The developer said there are no contamination issues but it has removed the communal room from the application as this was the area that council raised concern about.

The council is pressing ahead with plans to regenerate Reading’s historic town centre despite failing in its bid to buy part of the site. Reading Chronicle | Town Centre …