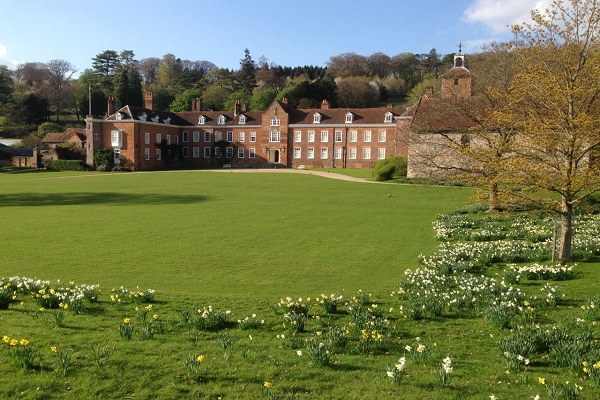 Stonor Park has been the Stonor family’s residence for 850 years.

Making it one of the oldest family homes still lived in today. It’s beautiful. This historic building and sweeping grounds are breathtaking. And the family collection of art and artefacts is extraordinary. You can view the work of St. Edmund Campion, created when he was given refuge here in 1581. And outside sits our oldest resident: a perfectly preserved prehistoric stone circle.
Stonor Park & Gardens - Home of the Stonor Family for over 850 Years - A Great Family Day Out in the Chilterns an hour from London

Welcome to Stonor - one of England’s oldest manor houses, situated in one of the most beautiful settings, owned by the same family for over 850 years. Recently listed as number 7 on Visit Britain's list of the Top 25 most magnificent stately homes and manor houses and now home to Wonder Woods, the fantastic new adventure play park.

The House, Chapel, Stonor Pantry Restaurant and Gift Shop are open on Sundays from April until the end of September, and some additional days during high season. Please see website for opening times. Wonder Woods, Stonor's fantastic new adventure play area is open from Wednesday to Sunday each week from March until the end of October as is the adjacent Chilterns Pit Stop Cafe which also offers a stopping point for walkers and cyclists exploring the Chilterns.

The park, with its famous herd of fallow deer, is also open by way of a public footpath throughout the year, from where there are stunning views of both the house and surrounding countryside. The footpath is part of both The Chilterns Way and Shakespeare's Way.

Stonor is closely associated with St. Edmund Campion, martyred in 1581. He was a Londoner, and a leading Oxford academic of the day, ordained a Catholic Priest and Jesuit on the Continent who had answered the call of the Pope to volunteer to work on 'The English Mission'.

Already known to the Stonor family, he was given refuge here in 1581 to print in the greatest secrecy a pamphlet describing 'Ten Reasons' why the historical Catholic faith should be preferred over the teachings of the newly Established Church. The rooms used to print this work can be seen, along with an exhibition describing St. Edmund Campion's life and death.